HVI knows Aerial Lift Truck Testing. For nearly 20 years,  HVI has supplied much of the world’s high voltage test equipment for the Dielectric Testing of aerial lifts: booms, liners, and hydraulic fluids. Whether AC or DC voltage is used, for field testing or for factory certification, HVI has multiple product lines designed for the job, up to 600 kVdc and 400 kVac.

For field maintenance testing fiberglass booms, liners, and workmen tools, both AC voltage and DC voltage can be used, although AC is usually recommended, as it best simulates the real-world voltage stress on the materials.  For factory certification testing, AC voltage is almost always used. HVI offers both.

The high voltage dielectric testing of Aerial Lifts, or Bucket Trucks, is a very critical testing application that must be performed correctly by trained personnel using the proper equipment and accepted testing methods, like ANSI Standard 92.2. HVI has extensive knowledge in high voltage testing and can help you more than any. The right equipment with the right support can make your testing needs easy. 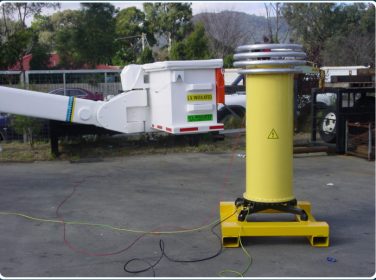 The voltage used to test booms depends on the class of the truck and the voltage of the overhead lines serviced. The most common hipots used are 0 – 100 kVdc @ 10 mA for DC testing and a 0 – 120 kVac model for AC voltage testing. Higher voltage rated trucks will require a 200 kV – 400 kV AC or DC tester, both readily available. The power needed from an AC hipot for boom testing is usually in the range of 2 kVA – 3 kVA.

For liner testing using AC voltage, a 0 – 50 kVac hipot is needed to test liners at 35 kVac or 50 kVac. The capacitance of a water bath liner test is high, requiring an AC hipot needing at least 9 – 10 kVA of power.  All vendors of AC truck testers offer models with output voltage taps designed for boom and liner testing, like a 120/60 kVac, a 130/35 kVac, and a 100/50 kVac design. However, some models do not offer enough power at the lower voltage to test all liners, like double liners. A dedicated liner tester can be used that may be rated for 0 – 50 kVac @ 10 kVA. Factory testing of most liners is performed at 50 kVac while field testing is done at 35 kVac. A DC hipot with a 5 or 10 mAdc output current rating can be used as well. For the oil testing, a conventional 0 – 60 kVac oil dielectric tester can be used if only the dielectric strength of the fluid is to be tested.

Boom Testing:   Boom testing requires the highest voltage but the lowest current since the capacitance of the booms is relatively low.  A truck requiring 100 kVac – 120 kVac of test voltage would draw perhaps 15 mAac – 20 mAac of current, for about 2 kVA of power.

Liner Testing:  Liner testing requires a lower voltage than boom testing but far higher power requirements, as the current draw at test voltage can exceed 150 mAac due to the high capacitance of a double liner and the test set up. Most factory testing is performed at 50 kVac. Using the above numbers, the current required at 50 kVac could reach 150 mAac, for a power requirement of 7.5 kVA. An AC test set designed to deliver 0 – 50 kVac @ 10 kVA is the typical size used. This is the extreme case in most situations Typical single liner designs draw < 100 mAac of power. 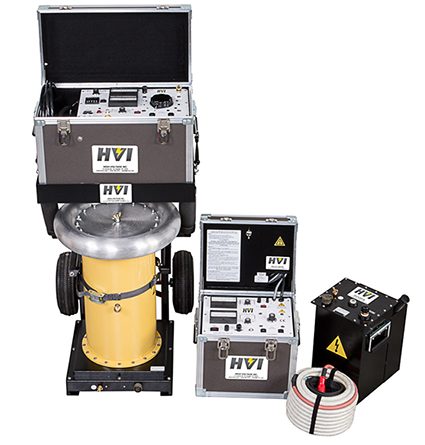 For boom testing, AC and DC voltage models are available. Here are your best options:

For fluid testing, the HVI DTS-60D or DTS-60A Oil Dielectric Testers are used. 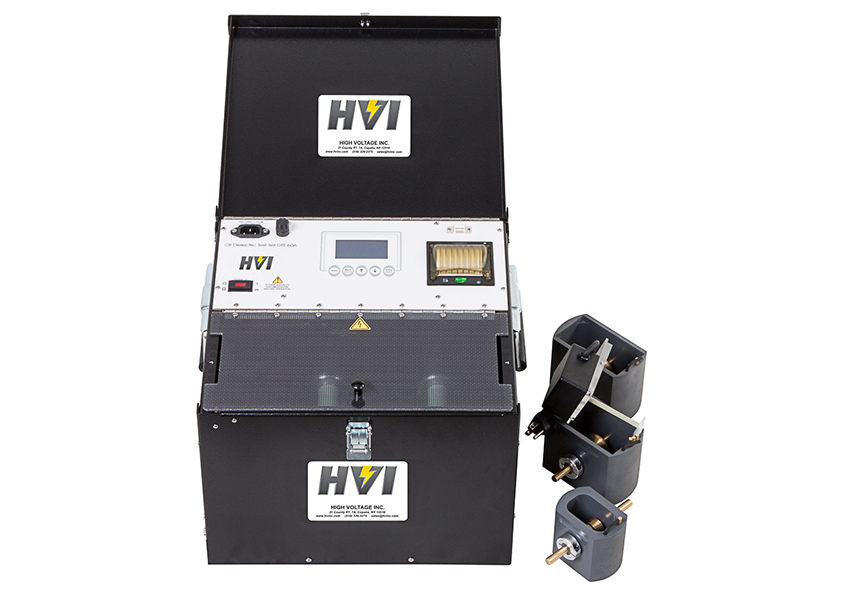 For testing liners, either the ALT Series model ALT-120/60 can be used, connecting the 60 kVac @ 7 kVA output voltage tap to the load, or a dedicated AC test set from the HPA Series can be used.  The most common models selected are the 0 – 35 kVac or the 0 – 50 kVac test sets, both rated 10 kVA in powe 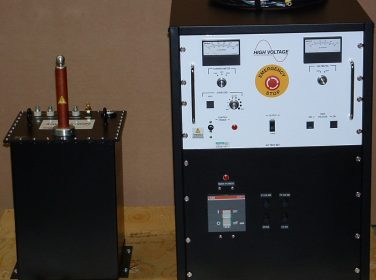